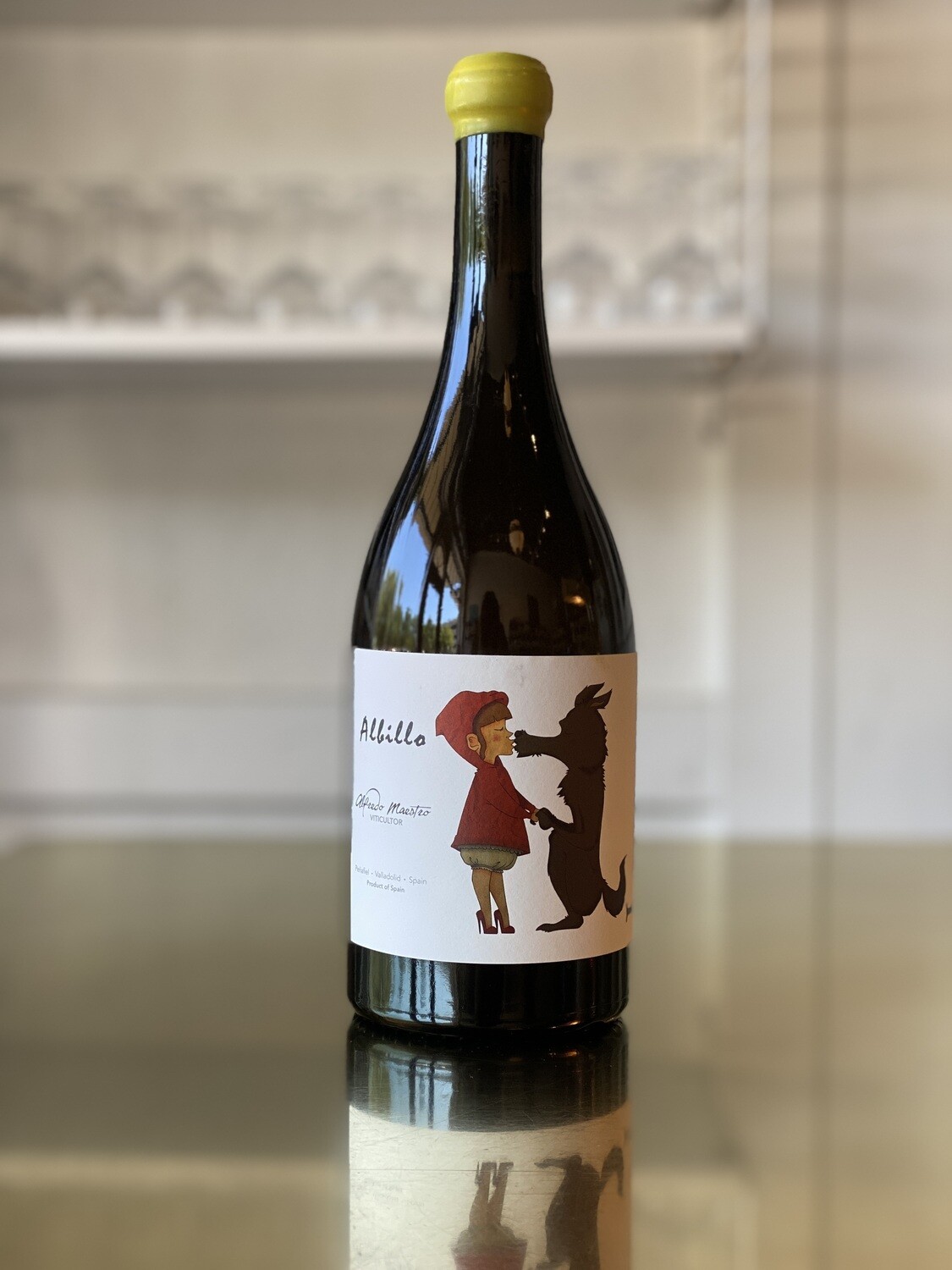 Lovamor is made from 60-120 year old Albillo Mayor vines grown on clay-limestone at 700 to 1000 meters elevation in the Ribera del Duero. Fermented in steel vat with wild yeasts and around one week of skin contact, and raised in tank with the winter temperatures naturally clarifying the finished wine, which is bottled with nothing added and nothing taken away.

“Wine made with only grapes, well-kept vineyards, and healthy land.” This is the mantra of Castellano winegrower Alfredo Maestro, a bright light amongst an abyss of industrially farmed, over-ripe, over-oaked, and over-manipulated wine-scape that is the Ribera del Duero these days.

Alfredo’s ascendance is unique to Alfredo. His family came to the winemaking town Peñafiel, Ribera del Duero from the Basque Country. Having grown up amongst the vines, Alfredo had a great interest in wine, and, through encouragement from friends, he started making his own wine in 1998. That same year he planted his first vineyard on the Rio Duraton near his home. From the beginning he farmed organically. In the cellar, Alfredo was working literally “by-the-book”, teaching himself enology from a book and using every trick in it to make a “correct” Ribera del Duero wine: yeasts, acid, enzymes, tannins, color-enhancers, etc. were just some of the techniques utilized. In search of serious “purple-ness”, this is how many of the modern Ribera del Duero’s of today are produced. In the early 2000’s Alfredo had a revelation. He questioned why as an organic farmer use chemicals to make the finished wine; he wanted to work as naturally in the winery as he did in the vineyard, in his words - "to better tell the story of the land." Alfredo began eliminating exogenous products, and in 2003 he began making wine without any additives whatsoever, including sulfur for all but a few wines. Alfredo still has a bottle of ‘Castrillo de Duero’ from that initial experimental vintage, and the wine is delicious, developing beautifully, deep, tarry, and tobacco – a great sign of things to come.

Over the past few years, Alfredo has been seeking out neglected parcels around the Ribera del Duero and the nearby Madrid to make wine from. He looks for old vines, poor limestone or granitic soils, and the requisite high elevation that gives freshness to wines grown on Spain’s great Meseta Central. Alfredo has accumulated 9 hectares and two small bodegas, one located in his native Peñafiel in the Ribera del Duero, where his father helps with the bodega work, and the other in the Navalcarnero area, southwest of Madrid. Alfredo makes no less than 11 cuvees from single vineyards and most notably from very rare old-vine parcels of Garnacha, Garnacha Tintorera, and Albillo located in the Ribera del Duero; these are grapes that were once embraced in the region but have fallen out of favor due to the region’s fascination with producing a 100% Tinto Fino wine. This prevailing mentality and fascination with spoof has worked to Alfredo’s benefit. He makes some of the most singular white and rosado wines in the region and his tintos are remarkable for their purity and elegance.

Alfredo’s goal is to make "easy wines with character imprinted with the earth and the vintage, authentic stories transmitted differently each year and not modified by the hand of the man in the cellar."