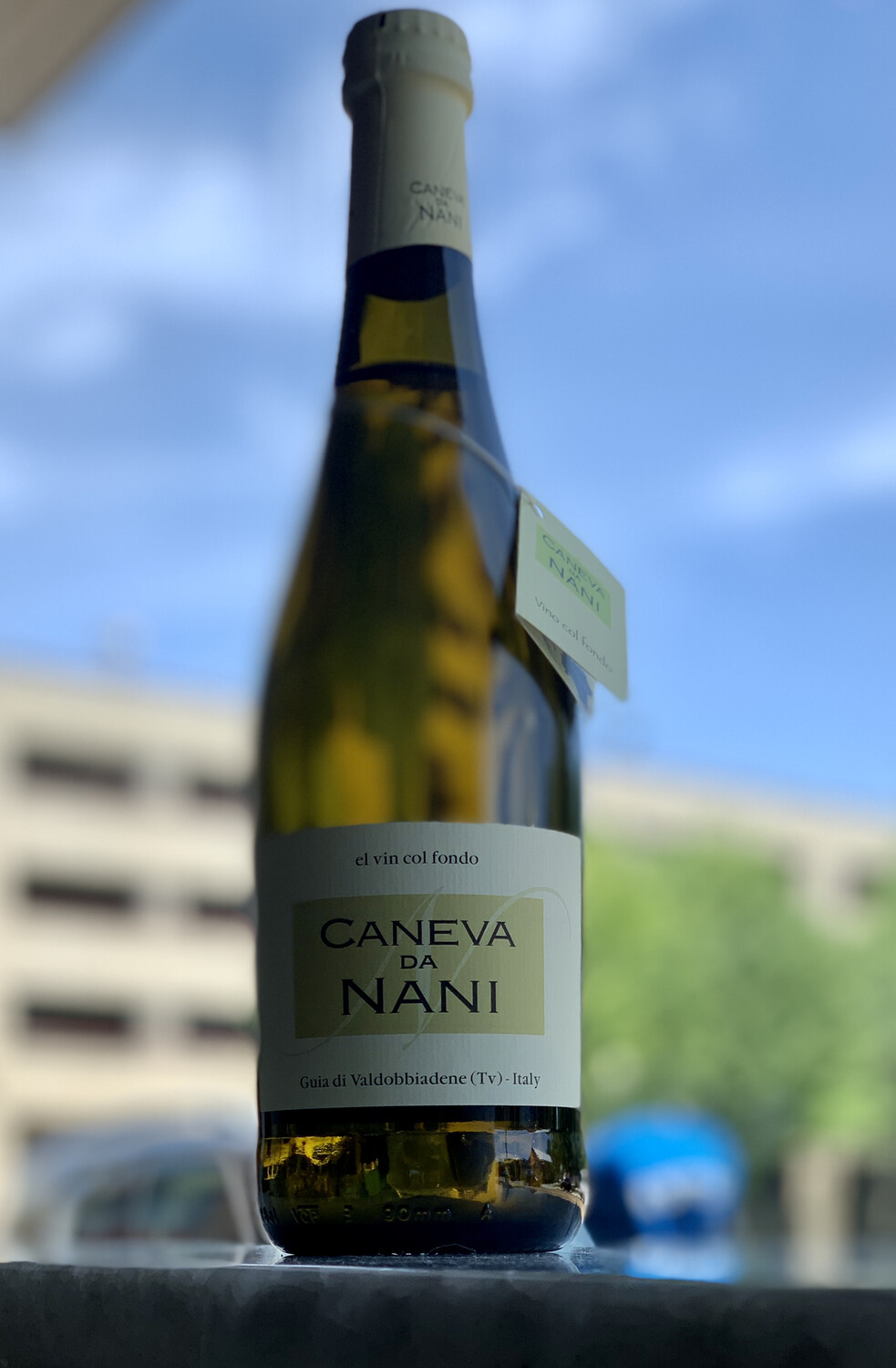 The 'vin col fondo' is a naturally refermented white sparkling wine made with 'Glera' must. After a maturation in vats it is then bottled and thanks to a specific temperature (15-18°C) the yeast ferments the residual sugars, saturating the wine into bubbles. At the end of this biological process that lasts about 60 days, the yeast settles at the bottom of the bottle leaving that unmistakable, unique and true natural preservative that leads to the evolution of the product’s organoleptic characteristics. They recommend to pour the wine in the jar leaving the sediments in the bottle.

Caneva da Nani is located in the hilltop village of Guia in the Valdobbiadene of the Veneto. The Canello family has been growing grapes in these mountains for 5 generations and making wine for themselves all along the way, since 1971 in an official way. Today Massimo is at the helm having taken over for his father Giovanni in the past 10 years though Giovanni remains an integral part of the farming and winemaking tradition ('Nani' is his nickname, hence the winery name. 'Caneva' is Venetian dialect for 'shady spot to sit and drink wine').

Today the farm is 6 hectares, tiny by most industrial scale measures in the region, and all agriculture is organic though not certified. No herbicides or synthetic pesticides are used in the fields and winemaking is kept as minimal and pure as possible (natural fermentation in cement, re-fermentation in bottle w/o sulfur additions for the Col Fondo). 350-400 meters above sea level, soils are mixed clay and limestone with a local form of Dolomite granite called ' ' in abundance. 100% glera vines are planted on impossibly steep slopes, all farming and harvesting must be done by hand. No helicopters are used employed by the Canello family to spray chemicals on the vines, this is the regional norm.

Guia as a village has some historical significance in the role it has played in the foundation of the 'Col Fondo' style of prosecco production. It was in Guia that the very well respected Loris Follador of Casa Coste Piane (CCP as it's often called) began making his throw back 'col fondo' prosecco in the 70's. This is what the farmers always used to make and drink for themselves but it fell out of fashion as the big industrial producers took hold in the 70's and 80's. It was here in Guia that a small collective of producers, including Caneva da Nani, revived the Col Fondo style of winemaking.

'Col fondo' roughly translates to 'sur lies' and intends that the wine has done a partial fermentation in the bottle thanks to a small amount of residual sugar and living yeasts still in the wine when it's bottled in the early Spring. Though all of the Caneva da Nani property lies within the Prosecco di Conegliano-Valdobbiadene Superiore zone (highest altitude, most respected terroir) he cannot call his col fondo by its DOC name. The DOC does not allow for the wine to be sold under the Superiore DOC if it has a crown cap. He has experimented with re-fermentation in the bottle under cork but without success, he sights that all Champagne is re-fermented under crown cap and he feels it captures the purity of the wine best. He could call the wine simply 'Prosecco di Valdobbiadene' but he feels that lumps his land in with the industrial wines being made in the valley below.

Massimo and his family generally decant the wine to help it open up and show the beautiful mineral and floral elements of the wine.