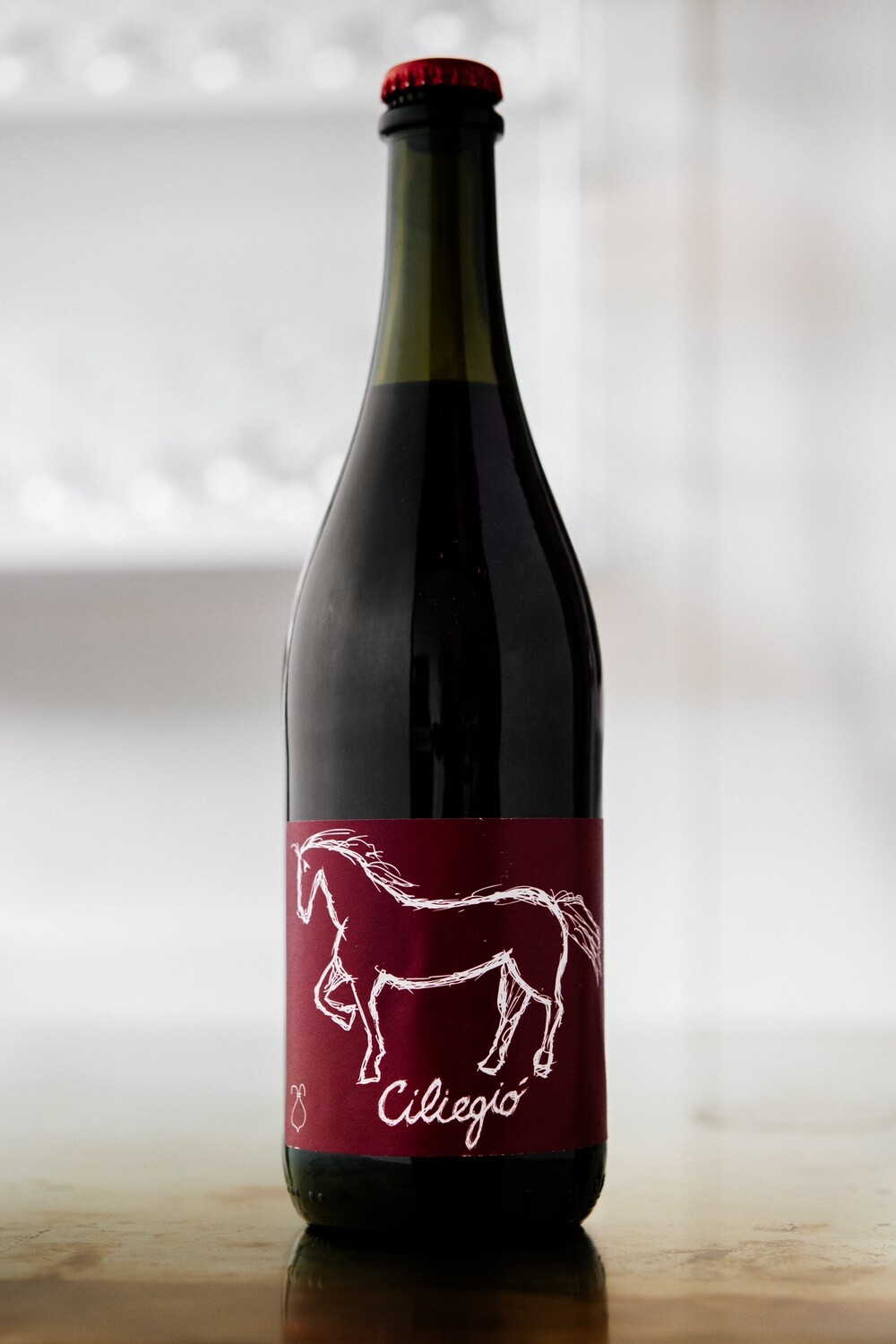 A wine named after one of the horses at La Staffa - Ciliegio (or “Cherry”). 100% Ciliegiolo. Spontaneous fermentation with 4 days skin contact without temperature control. Aged in fiberglass. No added sulfur and no filtering or fining. Bright and fresh with a classic salinity you find from wines around Trasimeno.

The history of the wines of Conestabile della Staffa is truly a window into the history of the Umbrian paradigm. Wine and culture collide under the guidance of master natural wine-whisperer, eno-artisan Danilo Marcucci. La Staffa is of his wife's family ancestry, this is made clear every time Danilo speaks of the property...he is merely a guest, married to the vines and his wife Alessandra's noble lineage.

The family history of Conestabile della Staffa is long and complicated, as one would expect for a noble family that dates back through the middle ages. The Conestabile families originated in Orvieto, the southwestern corner of Umbria just north of Rome. The Della Staffa family dates back to antiquity and is from Perugia, just several kilometers from the winery.

An arranged marriage in the 1700’s brought together these two important and noble families, both interested in consolidating land and influence in what was a very poor region. During its heyday in the 1800's, the Conestabile della Staffa property totaled over 700 hectares of mixed agricultural land, of which over 100ha were under vine in traditional 'promiscuous' agriculture. During this period, in the late 1800's and early 1900's, Conestabile della Staffa was the most important social cantina in the Trasimeno-Perugino area; at its height they produced over 10,000 hectoliters of wine per vintage. You can see remnants of this historic winemaking in the castle/homestead located at the top of the hill in the village of Monte Melino.

In the 1920's the hamlet of Monte Melino was home to over 20 small families, each relatives of the Counts of the Conestabile della Staffa. Danilo's wife, Alessandra is the descendant (great granddaughter) of one of these Counts. The village essentially was a self-sufficient commune/fiefdom at that point. Work and profit sharing among the families was divided equally in all sectors of the farming; raising cows, growing and drying tobacco, making wool & silk, a cobbler, a school, a metalworker, and of course olive oil and wine.

In the post-World War era wine production dramatically decreased due to the reduced workforce for farming as people moved into the cities. The last produced vintage from the old cantina was in 1956. From 1956 until 2015 no wine was produced on the property, instead the grapes were sold off to the local co-op for this entire period.

Today Conestabile della Staffa is literally being reborn, re-envisioned by the work of Danilo Marcucci. It's an undertaking of epic proportions. Over 12 hectares of vines, many of which have been in disrepair for over a decade, but were planted in the early 1970's. Luckily the land was never touched by chemicals.

The wines are made in the most natural way, adhering to methods that Danilo has learned over the course of 20+ years of winemaking and farming experience from some of Italy's great 'masters' (Lino Maga, Eduardo Valentini, Cappellano, Vittorio Mattioli and others). Native grapes (grechetto, trebbiano, ciliegiolo sangiovese, Gamay del Trasimeno, canaiolo, sagrantino) are the backbone of the property, a truly inspirational project with a bright future. No yeast, no chemical corrections, no sulfur. "No technology", as Danilo would say.