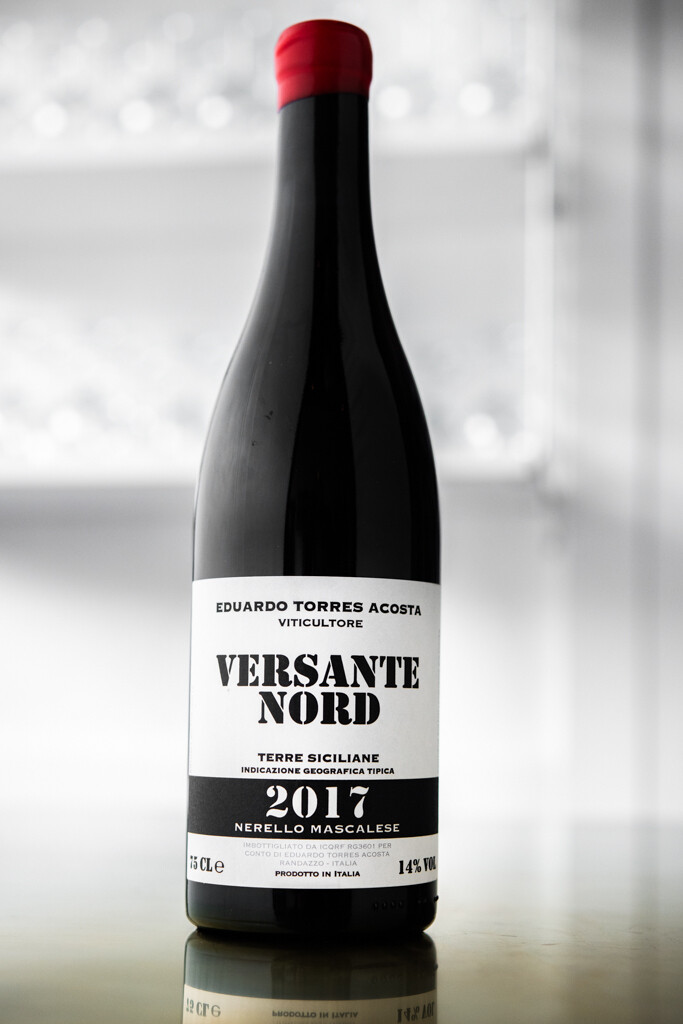 85% Nerello Mascalese/15% other. Versante Nord, both the Bianco and this Rosso, comes from 6 parcels totalling less than 2 hectares on the cooler, north-facing side of Mt. Etna (hence the wine's name at elevations ranging from 750 to 950 meters. In traditional style, he vineyards are mixed plantings of various local varieties. The black grapes include a majority of Nerello Mascalese with Nerello Cappuccio, Alicante, Garnacha and others; the whites include Minnella, Catarratto, Grecanico, Carricante and Inzolia. The pruning is mainly alberello, in some cases growing as bushes and in some trained on wires. Eduardo rents and/or farms these parcels organically. In general the soils are sandy, fine and rich in volcanic ash and lie over a sedimentary mother rock at various depths.

In the contrada of Allegracore, Eduardo rents 0.7 hectares of 50-year-old vines; the fruit lends a bright fruitiness and freshness to the final blend. In the contrada of Pietramarina, the vines average 35 years but reach about 80 years old on sandy volcanic soils; the altitude here is lower, so there is higher ripeness and more robust tannins lent to the wine. An additional parcel, Monte Portella, was added to the mix in 2017 and features limestone soils that contributed a high-toned, high-acid cut to the wine in this drought vintage.

The bunches are harvested manually into small bins and are partly destemmed and partly left as whole clusters, depending on the vintage--with more stems in 2017 in order to lower the alcohol. The fruit is gently pressed and the juice fermented spontaneously with indigenous yeasts; in hot years like 2017, the fermentation takes longer, so the maceration ended up being a lengthy 25 days, in cement tanks without sulfiur or temperature control. The different parcels are vinified and aged for a time separately, then blended into huge Slavonian oak botti for further aging. The wine is bottled without fining or fliltering and minimal sulfur is used.

Eduardo Torres Acosta, a young winemaker from the Canary Islands, first began working with vines in Tenerife where his father (a local postman) had a small plot of land. In 2012 Eduardo moved to Sicily, where he interned at Azienda Arianna Occhipinti (you may have heard of her.) Soon thereafter he got a job as the enologist at Azienda Passopisciaro, one of the pioneers of Etna's new wave of producers. Despite Eduardo’s "outsider" status, he managed to rent several fine parcels on Etna from locals. Up until the 2017 vintage, the grapes were harvested and then trucked to Arianna Occhipinti’s estate in Vittoria. Since the winemaking facility is not on Etna, the wines were not allowed DO status and simply carry the IGT Terre Siciliane designation. Eduardo was able to convert a small Etna garage into a winery, so this may well change with the release of the 2018's.