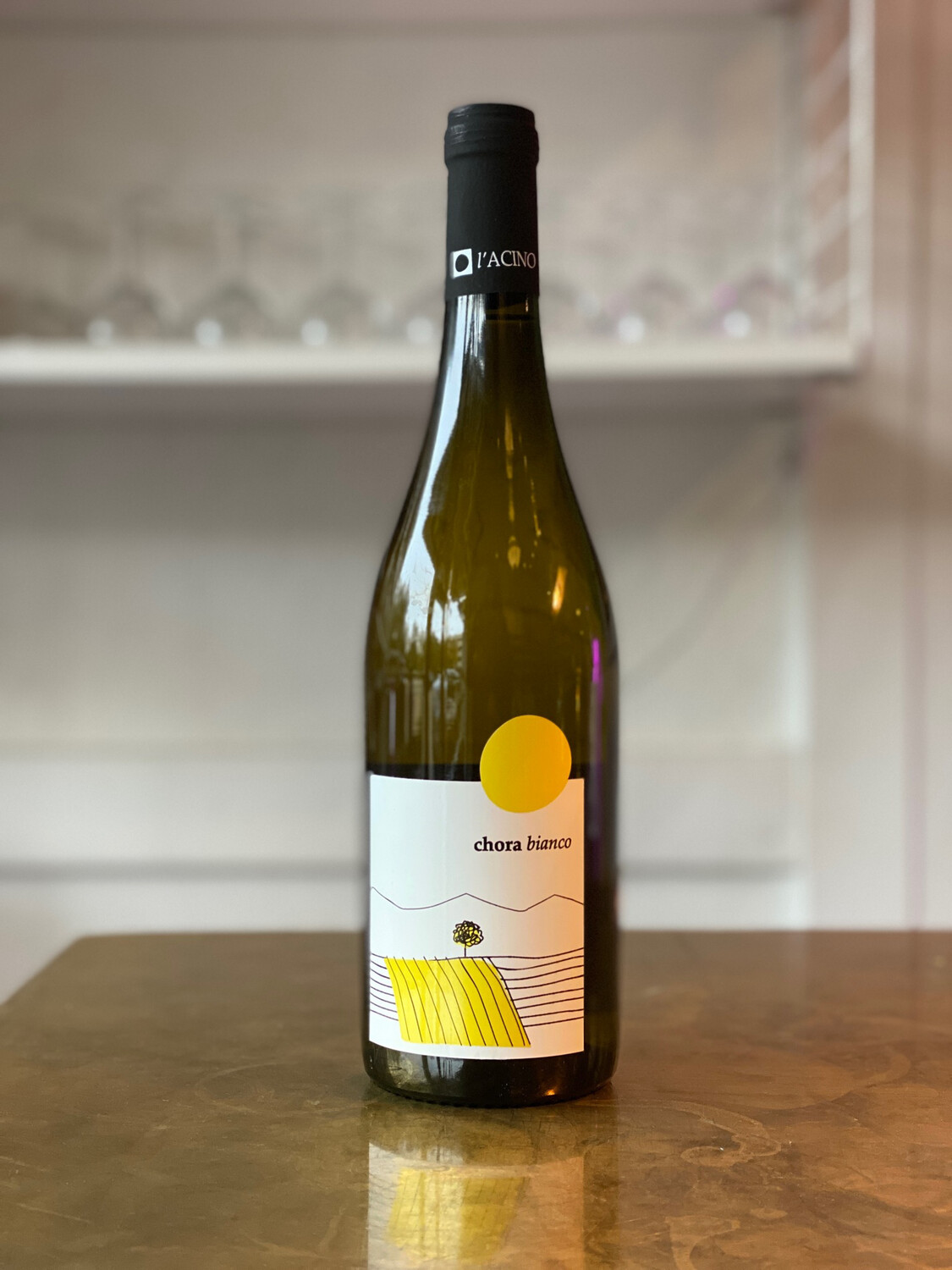 "Chora Bianco" comes from L'Acino's younger vines on sandy soils at the foot of Monte Pollino in northern Calabria near the Basilicata border. The vines are own-rooted from old-vine massale cuttings. The farming is certified-organic and harvest is manual. The bunches are direct-pressed and fermented in stainless steel tanks with native yeasts and no sulfur or temperature control. The wine is tank-aged on its fine lees for a year and bottled without fining or filtration and with a tiny amount of sulfur. "Chora" is Greek for the Italian campagna or "countryside" (vignaiolo Dino Briglio is a historian by career and passion).

Dino Briglio founded L'Acino in 2006 with two childhood friends who have since amicably bowed out of the project. As natives of the mountain town of San Marco Argentano, the winery is a communal effort to express the oft-forgotten possibilities of Calabrian terroir. Though they had no viticultural or winemaking experience, their love of wine was enough to start an estate. And the trio's taste for vini naturali meant focusing their attention on organic viticulture and minimal intervention winemaking.

After a year of searching far and wide for a small vineyard, the friends struck gold with a hectare of the indigenous white grape Mantonico. Purchased from an old farmer who deemed the land too hard to work, this picturesque vineyard is located right on the border of the Pollino park, the largest natural park in Italy. The next step was seeing something through from the beginning, and so a new search began for a suitable terroir that had never been planted in vines. This again took about a year, but resulted in the discovery of a stunning, sandy coteau that the guys have planted in Magliocco and Mantonico from massale, along with Guarnaccia Nera and Bianca, Pecorello and Greco, much of it in franc de pied. Planted in 2007, these young vines produce the estate's two entry level wines, both called Chora and both extremely fun, lively and surprisingly light gulpers.

Dino, now fully at the helm of l'Acino since 2016, works ten hectares of vines and rents five (mostly of older vines). All the vines are between 400 and 650 meters elevation. Though he's never studied viticulture or enology, he is the son and grandson of farmers and the work has proved to be instinctive.

The wines ferment off their native yeasts, mostly in stainless steel vats, though a small amount of old French oak is used for the older's vines' best grapes. Vinifications take place without addition or retractions, save a small amount of sulfur at bottling. The whites in particular are wildly original and compelling, while the reds are a pure, quaffable joy.