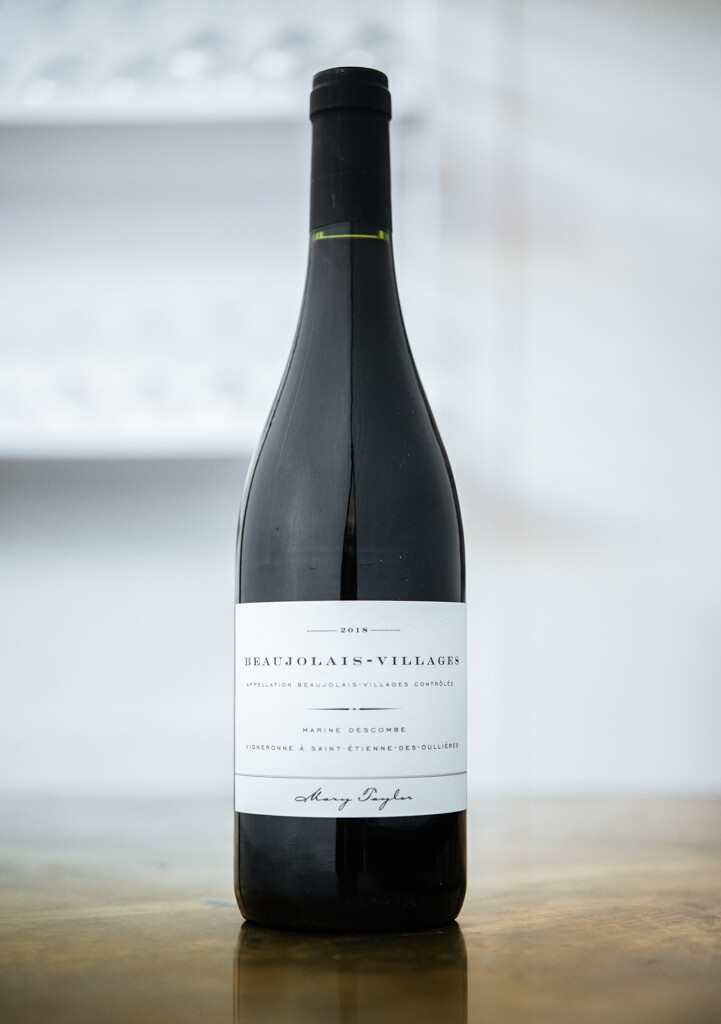 A textbook blue stone Brouilly style Beaujolais-Villages from one of the great women winemakers in France. Beautiful purity of gamay noir fruit – meets cement ageing – showcasing the unique expression of Beaujolais that cannot be reproduced anywhere – but here!

Beaujolais Villages is produced in part of the Beaujolais vineyard. It’s the first appellation in France to use the term “villages”. In 38 municipalities of the Rhône and Saône-et-Loire, and 3 geographical zones with marked specificities, these fruity and fleshy wines reflect the characteristics of their terroirs. The vines are often planted in altitude and on hillsides. These delectable red wines mark a kind of transition between Beaujolais, in the south and the ten crus further north.

The first thing you’re bound to notice when you pick up a bottle of Mary Taylor Wine is the lack of a familiar grape on the label. No Pinot Noir or Cabernet, no Chardonnay or Merlot.

That’s because the team of lifelong wine lovers who make up the Mary Taylor company, think about wine differently than the usual brands lining the shelves of your local supermarket or big box store. To them, the name of the grape only tells part of the story of what wine is supposed to be. The missing key, which the great winemakers of Europe have known for centuries, is “place.”

When founding partner Mary Taylor first fell in love with wine in the early 1990’s, it was the European classics that truly spoke to her and stole her heart. As a young professional selling French and Italian wine, first in the New York wine auctions and then as a merchant, she quickly learned to appreciate wine in the “Old World” way— not as a luxury good reserved for special occasions, but a living agricultural product that belongs to everyday life.

This awakening eventually led her to move to the storied region of Burgundy. There, deep in the heart of rural French wine country, her experiences living and drinking among the area’s independent artisan growers cemented her understanding of wine as a form of liquid culture, reflecting the people and places where it has been lovingly crafted for generations.

A specific French term exists for this romantic notion that, in addition to tasting delicious, wine should tell us something about the area from which it came. Although impossible to translate literally, this concept of “terroir” has sometimes been described as a “sense of place,” or “somewhere-ness.” It explains why the Pinot Noir from one village in Burgundy will taste noticeably different from the same grape grown in the next town, or even the next vineyard over.

It’s also the reason why most European wine regions label their wines not according to the grape variety, but the “place name,” or “appellation” where it was grown. Whether known in French as appellation d’origine protégée, in Spanish as denominación de origen, or in Italian as denominazione di origine controllata, the basic idea is the same: each designated area imparts its own special identity, no two expressions alike.

After many years working with the wines of Europe, Mary arrived at an important insight. Left in the dark by decades of simplistic marketing efforts that placed grape above geography, American consumers needed a brand they could trust to decipher the complex notion of terroir in a clear and straightforward way. Out of this realization, our elegant “White Label” was born.