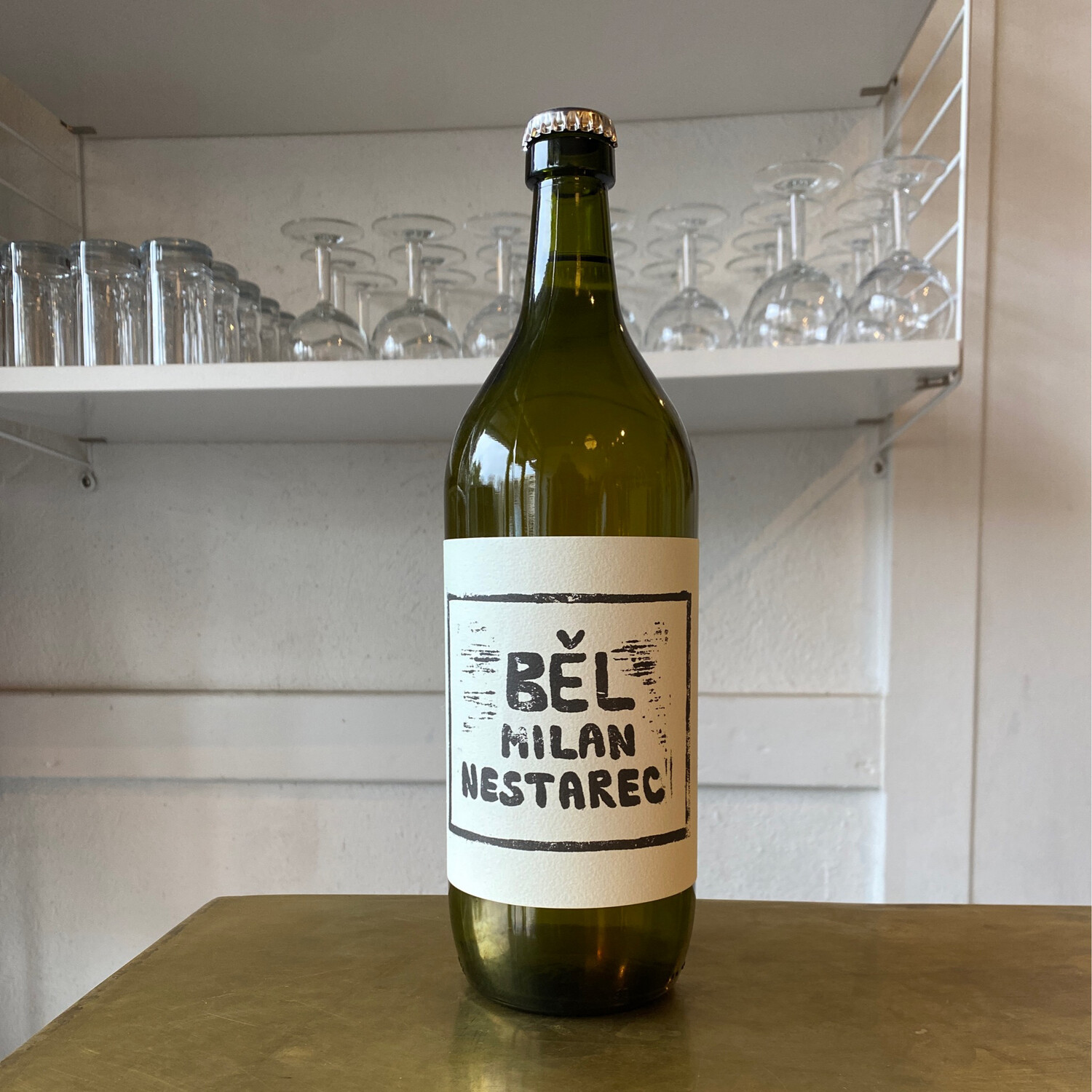 Milan on this wine: “This wine embodies my unassuming Moravian roots. Made with “common” local grapes that are neutral and low-alcohol and hence always used to be blended together for an everyday wine. (Gewurztraminer being the fancy Sunday-kinda-wine). An approach I like–and Běl and its plump, juice-like 1-liter bottle is my tribute to that.

I remember hearing the word “másnica” used for a bottle of wine when I was a kid. Only as an adult did I learn that it derives from the German Mass, an old volumetric unit roughly equalling 1 liter, which used to be a standard size of bottle for a guy working in the field (mixing it with water to get more quantity). I do love the term “minimagnum” too, though, courtesy of my Montréal friends.” The name Běl means white in old formal Czech, another tribute to things past. Linocut label by Milan’s wife Mirka.

Milan says the aim with this wine was to have a bottle he can bring even to his conservative neighbors because it’s so approachable – fruity, with good acidity and pleasant citrusy aroma – that you can drink it with literally everyone, be they natural wine fans or haters. Mission accomplished!

The first vines that the Nestarec family started to work with grew on a tiny plot that was returned to them as restitution in the early 1990s. The winery went professional in 2001.
Milan’s father Milan Nestarec Sr. entrusted him with all the winemaking when Milan was barely 16 years old (which makes Milan quite an experienced young winemaker now at only 33 years of age).
The vineyards and cellar switched to organic and low intervention in late 2008, inspired by Milan’s multiple encounters with natural winemakers at home and abroad.
The world discovered Nestarec wines partly thanks to the Mosel biodynamic pioneer Rudolf Trossen who found them interesting and kept sending people to the Nestarec tasting table at a natural wine fair in Cologne. Only later Milan discovered that this is what made him met his first importers.
The current focus of the winery is to go to great lengths to care for old vineyards and keep the energy in the bottle.
Milan is a real lover of Jura, fire-roasted sausages, and exchanges of ideas. “This is the real reason why I make wine – because it’s an incomparable vehicle to connect with interesting and/or like-minded people and creators. Such a social medium.”