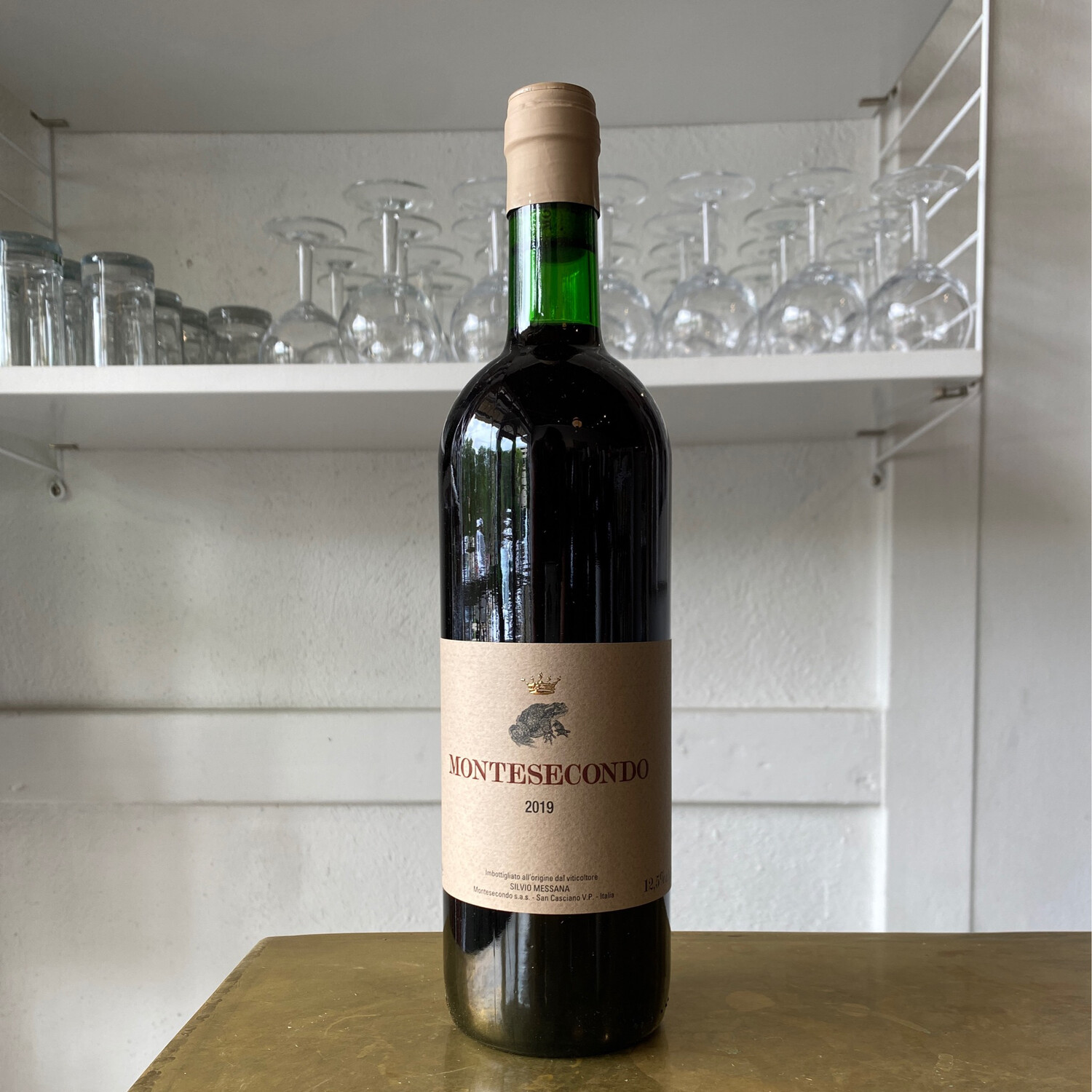 100% Sangiovese. This is Montesecondo's largest production and always the first release of the vintage. Silvio has two separate properties: both are biodynamically farmed and both lie in the San Casciano zone of Chianti Classico but are quite different from each other. The original family vineyard, generally referred to as "Montesecondo", is lower-altitude, warmer, flatter and with heavier clay soils in the town of Cerbaia; the newer one, referred to as Vignano for the name of the tiny village, is up at 500 meters and is cooler, hillier and rich in limestone. The fruit for the IGT comes from both properties, often from the younger vines and always picked earlier than the Chianti and the "Tin" red. Harvest is by hand and the bunches are mostly but not all destemmed, with varying proportions of whole bunches layered with whole berries in the concrete fermentation tank. The juice ferments spontaneously with natural yeasts and no sulfur. The maceration is shorter than for the Chianti and there are no punchdowns or other extractive measures. Aging is in concrete tank for about a year.

In a previous life, Silvio & Catalina Messana were New Yorkers. There had always been this beautiful farm in Tuscany outside of Florence where Silvio’s mother lived. They visited yearly. His father had planted vineyards there in the early 70’s. Since his death, his mother looked after them and sold the grapes to a local negociant. In the mid-90’s, Silvio’s mother was ill and Silvio’s family decided to move back to be near her. By this time, Silvio already had developed a passion for wine in the United States. With the certain impossibility of finding an affordable rent in New York and 3 growing sons, Silvio & Catalina decided to stay on after his mother’s death, turning the Chianti Classico farm into their home with a portion of the farm converted as a half-year bed-and-breakfast. Silvio immediately began working on the vineyards himself.

Catalina was against using any chemicals on the farm, insisting there must be a better way. Gradually through introductions to winemakers outside of the region who were using biodynamic vineyard practices (among them Nicolas Joly, Stefano Bellotti of Cascina degli Ulivi and, inidrectly, Sandro Sangiorgio, the director of the wine magazine Porthos), Silvio began to lose his fears and have faith that it was possible. Their advice led the Messanas to take the leap into natural farming and seeking a way to make the wine without the use of added yeasts or other additives and enhancers. In the meantime, piece by piece, Silvio built a winemaking facility with his own hands (there was a small winemaking “garage” on the estate before) and things fell into place.

In the vineyards, Silvio has old and younger vines of Sangiovese and Canaiolo with plantings of Colorino, Cabernet and Merlot and even a little Petit Verdot. The vineyard is contiguous surrounding the farm and is on the south bank of a ravine, or borro, where there is sunlight on the vines all day long. 2003 was the first vintage fully vinified using only the grapes own yeasts. After the 2002 harvest which had frost in the spring and hail in the summer, the heat of 2003 was almost pleasant (it’s always hot here in summer), and the harvest was pretty normal, with good, healthy fruit.