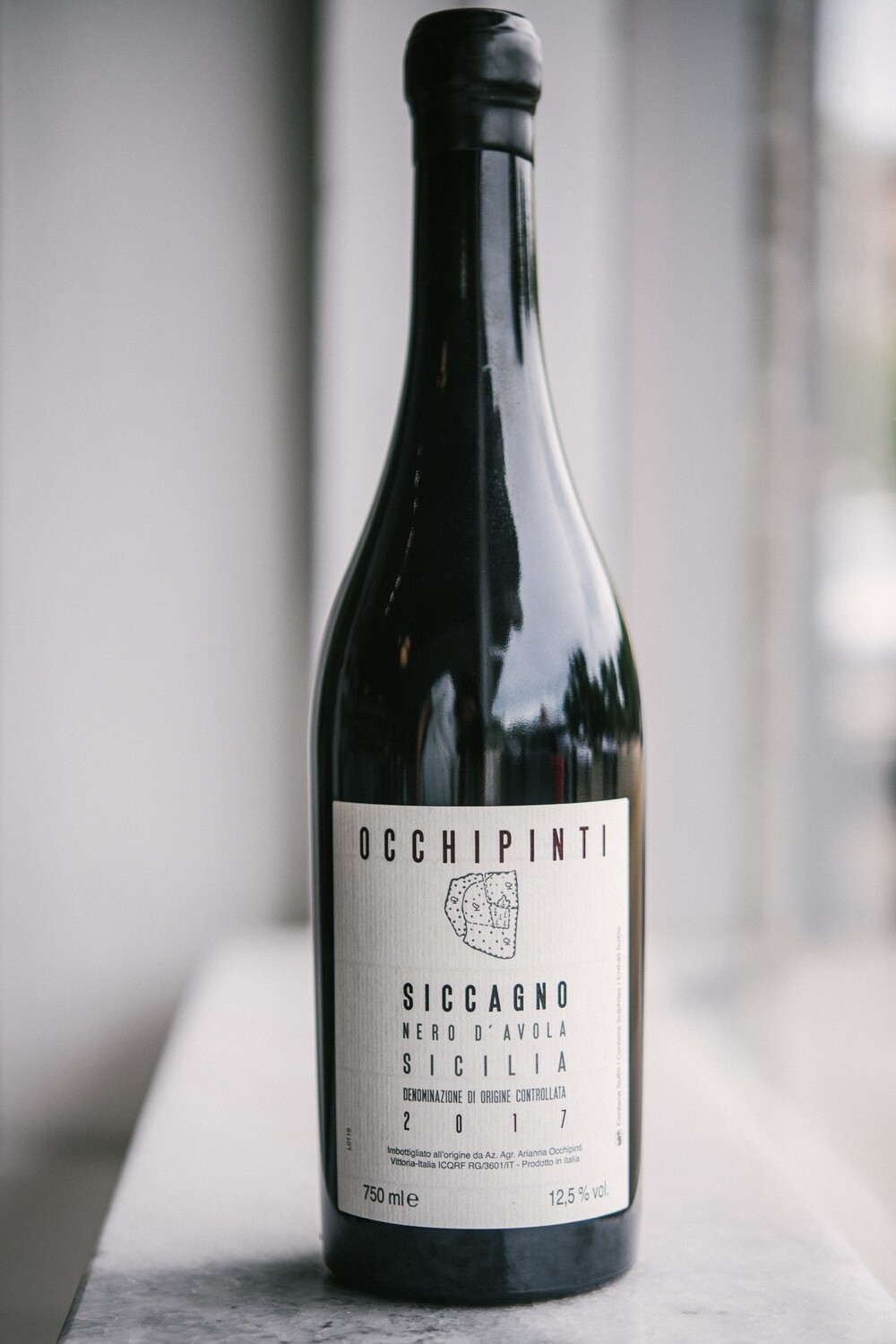 100% Nero d’Avola. Two parcels on white limestone soils go into Siccagno (which is both site name and dialect for "good wine"), one being bush-trained, the other in double Guyot. The vines average 30 years old, are organically and biodynamically farmed and harvested by hand, generally in the first 10 days of October. The fruit is destemmed but the berries left whole; it is fermented with native yeasts and 20-25 days of maceration. The wine is aged for 2 years in 3000-liter Stockinger (Austrian oak) casks before being bottled unfiltered.

Occhipinti is located in the Vittoria region of southeastern coast of Sicily between the Mediterranean Sea and inland mountains. Owner, winemaker and viticulturist Arianna Occhipinti founded the estate in 2004, bottled her first commercial vintage in 2006 and today works exclusively with estate fruit. Her 25 hectares are certified-organic and practicing biodynamic and feature only native Sicilian varietals: 50% Frappato, 35% Nero d'Avola and 15% white varieties Albanello and Zibibbo (aka Muscat of Alexandria). The Frappato and Nero d'Avola vines range from 10-year-old guyot-trained vines which she planted all the way up to 60-year-old alberello-trained vines which she rented initially and was later able to add her holdings. Total production is approximately 10,000 cases annually.

Arianna started at age 16 in her uncle Giusto Occhipinti's cellar--he being the proprietor of Vittoria's most famous winery, COS--and loved it, enough to go to oenology school and to jump right into her own production. She began with a mere one hectare of abandoned vines attached to a family vacation house. Though university imparted technical knowledge of a sort, the main influence on her ways in vineyard and cellar was in fact her uncle, who raised his wines as well as his niece on organic viticulture, harvest by hand and native-yeast fermentations, none of which is typical of Sicily's bulk-driven wine production. In Arianna's own words: "Not irrigating, harvesting late and not using fertilizers are the secret to making more elegant wines in the area. The freshness and minerality in my wines come from the subsoils. Any wine made from young vines or chemically grown vines feeding only off of the top soil will have the cooked, hot characteristics people associate with wine from warm regions."

There was never any doubt in Arianna's mind about whether to pursue this natural approach in order to express the freshness of the Vittorian microclimate, the minerality of the chalky soils and the purity of the best local grape varieties. She made a number of other significant choices in pursuit of this balance. The farming is biodynamic. There is zero irrigation in her vineyards in this hot, windy climate. Cover crops including fava beans and other useful plants grow between every other row. New plantings are massale selections only. Juice and wine are moved only by gravity. There is no new oak. Her flagship SP68 wines (white and red blends named for the nearby main road) are vinified and aged in small concrete tanks, with no oak of any kind and no punchdowns. The red is in all but name her version of a Cerasuolo di Vittoria, the DOCG blend of Frappato and Nero d'Avola; she eschews the DOCG designation in favor of shorter aging for a fresher take on this regional signature. And for her next level of longer-aged wines from older vines, a pure Frappato and her 100%-Nero d'Avola Siccagno, there is no new oak--the use of which has been an attempt by some Sicilian producers to add a sense of gravitas to their wines for the international wine market--and the most gentle handling.

Arianna's star has risen very quickly over the last decade in the wine world, and she is rightly regarded as a symbol of success in the world of biodynamic farming and natural winemaking. She has remained committed to those principles, while evolving from her originally more dogmatic outlook. Below is her response to importer Jules Dressner's question about her feelings on the term "natural wine":

"I make natural wine, but this is a term I'm beginning to be less and less comfortable with, because its implications are very complicated. I really want to stress that my main goal is to make a good wine that reflects where it comes from, and for me the only way to successfully do this is to make the wine naturally. When I first started, people were just starting to talk about natural wine. It was very important to me to think about all these issues , and in those early years I definitely had a more militant attitude about it. Making natural wine was a mission, something worth fighting for. Now that I've grown up a little bit, the mission is making wine of terroir. You have to respect the vineyards, and nature in general. When I wake up in the morning, I want to feel free. Making this wine is my opportunity to feel free. So again, my goal is not to make natural wine, working this way is a process to make good wine."