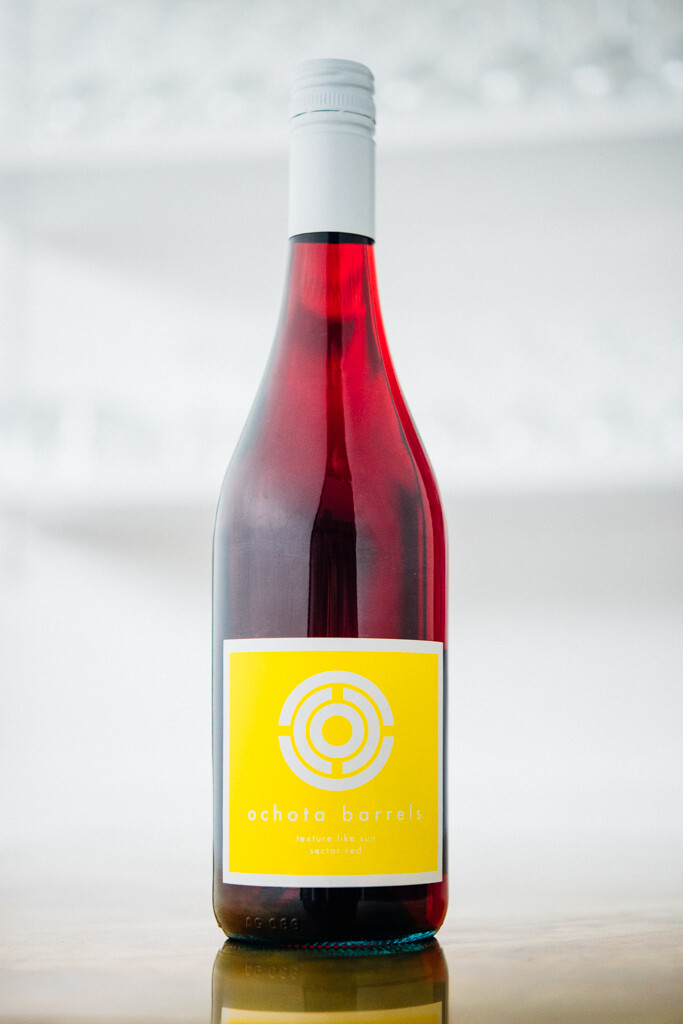 The label may be completely illegible with its utterly lurid and almost painful yellow label. “That’s the idea”, says winemaker Taras Ochota. “It’s something in a clear bottle, released in Spring, nothing to hide, yummy”. It’s 100% destemmed but whole berry (with a lot of solids) Grenache, Gamay, Syrah, Merlot, Pinot Gris, Chardonnay and Gewürztraminer. This wine is all about carefully blending the nine varieties to achieve a wine that is basically and simply…delicious! The varieties are partially co-fermented and some lots kept separate before being basket pressed to stainless steel where it rests for a few months. ‘Texture like sun’ are words extracted from the song ‘Golden Brown’ by The Stranglers. “We had it play at our wedding”, offers Taras.

Dark forest fruits, spice, licorice and perfumed green herbs float around an undercurrent of roasted meats. Lush texture with brisk acidity. The palate entry is lusciously red and supple then gives way to finely shaped tannins that are swept up by a wash of damson, cigar box, and cassis. Finishes squeaky and so fresh. So drinkable. Feels summery being near it.

The Ochota Barrels tale began on a surf trip, late 2000 along the Mexican west coast in a Volkswagen campervan. A final destination after traveling some of the world’s best wine and surf regions, Taras and Amber Ochota conceived the idea to make super premium wines back home in South Australia. The concept was to concentrate on the zenith variety of Mclaren Vale (Grenache) and the Barossa Valley (Shiraz), find an exceptional old vineyard site in each region and create plush, small batch, single vineyard wines. With the winery situated in Lenswood, and steep, high altutude, cool climate, north facing Burgundian cloned Chardonnay over a rock base of quartz and ironstone, at 1,800 feet above sea level......hello!!!?

As an Oenology graduate from Adelaide University, Taras developed his craft at wineries such as Two Hands and MSV in the Barossa Valley, renowned for world class Shiraz, Grenache and Mataro. Prior to this, Taras was at Nepenthe in the Adelaide Hills, who have achieved numerous accolades such as ‘Best Chardonnay in the World’ at the London International Wine Fair.

More recently he worked as the European Flying Winemaker, concentrating on the Italian regions, Puglia and Sicily, for the Swedish wine importing company, Oenoforos.

California has also been a regular vintage destination of his, making wines with producers such as Kunin, Bonnacorsi, Arcadian, Schrader, Outpost and the famous Hitching Post’s label, Hartley-Ostini, from the movie ‘Sideways’.

Taras takes a less is more approach to winemaking and infuses his background and love for music into his wines in both a literal and figurative sense. Literally the majority of the wines are named after favorite bands/songs (Shellac, Fugazi, Slint, I am the Owl, etc.). Figuratively Taras says that "Music and wine are so connected in so many ways, I reckon you can often see the styles of music people like in the wines they make. I like edgy music, rawer, sharper, and my wines tend to be all elbows and knees sticking out. Someone else might like folk music, and they make rustic, countryesque wines. And then you get mainstream big production wines that taste like music that’s been overdubbed and Auto-Tuned and had things taken out and put back in.”

This isn't wine made by Britney Spears...