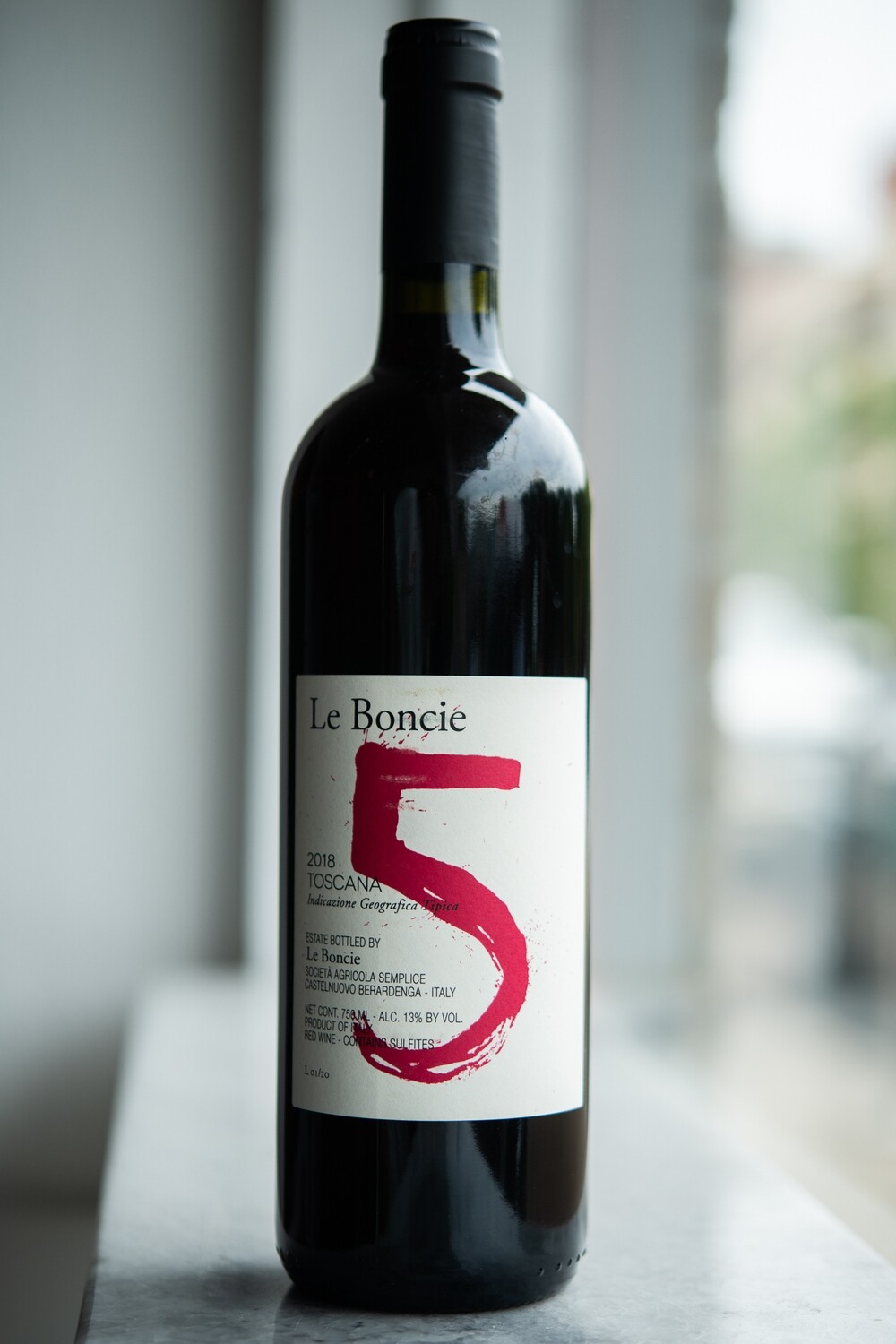 “Il Cinque”: is the little brother/sister of “Le Trame” from Podere Le Boncie. Originally this wine was sold only at the winery and was essentially created from fruit of vines younger and/or less well-positioned. Recently, Giovanna Morganti acquired access to a vineyard 3 kilometers up the road from their house in San Felice, a hamlet of Castelnuovo Berardenga but just outside the Chianti Classico zone. This new parcel is 1.3 hectares with very rocky limestone soils facing south-southwest in a windy area that is good for the health of the vines—Sangiovese with two rows of Canaiolo. (Her 3-1/2 hectares in the Chianti Classico zone are planted to Sangiovese with a bit of Mammalo, Colorino and Fogliatonda—first vintage bottled was 1990.)
The wine’s name “Cinque” recognizes the original composition of the wine, namely five grape types classic to the production of the finest Chianti Classico: principally Sangiovese with Colorino, Mammolo, Fogliatonda and Ciliegiolo completing the quintet. Recently, the wine is no longer composed strictly of the 5 grapes anymore, but Giovanna says the name also refers to the relative precociousness of the wine, thus a wine to “keep at hand” [5 fingers]. She also notes that grape vines have five leaves and flowers per bunch, that their house address is number 5, and that in Italian school you are graded one to ten, with five not quite passing, a bit of ironic understatement and a wink-of-the-eye modesty in reference to a wine that has assumed a rather majestic place amongst the elite wines of Tuscany. Cinque is perhaps less formidably structured than the Le Trame but it is no less noble, carrying its mantle of the particular terroir borne of the hills surrounding Castelnuovo Berardenga, wines of vigor and cut that chant the song of Sangiovese.. All parts of a good story to justify this quirky name of “5” or “Cinque”.
The Cinque is fermented in steel and then spends one year in wood vats of varying sizes (5 to 30 hectoliters). It is then assembled in tank, left to rest for a bit, and finally bottled without fining or filtration.