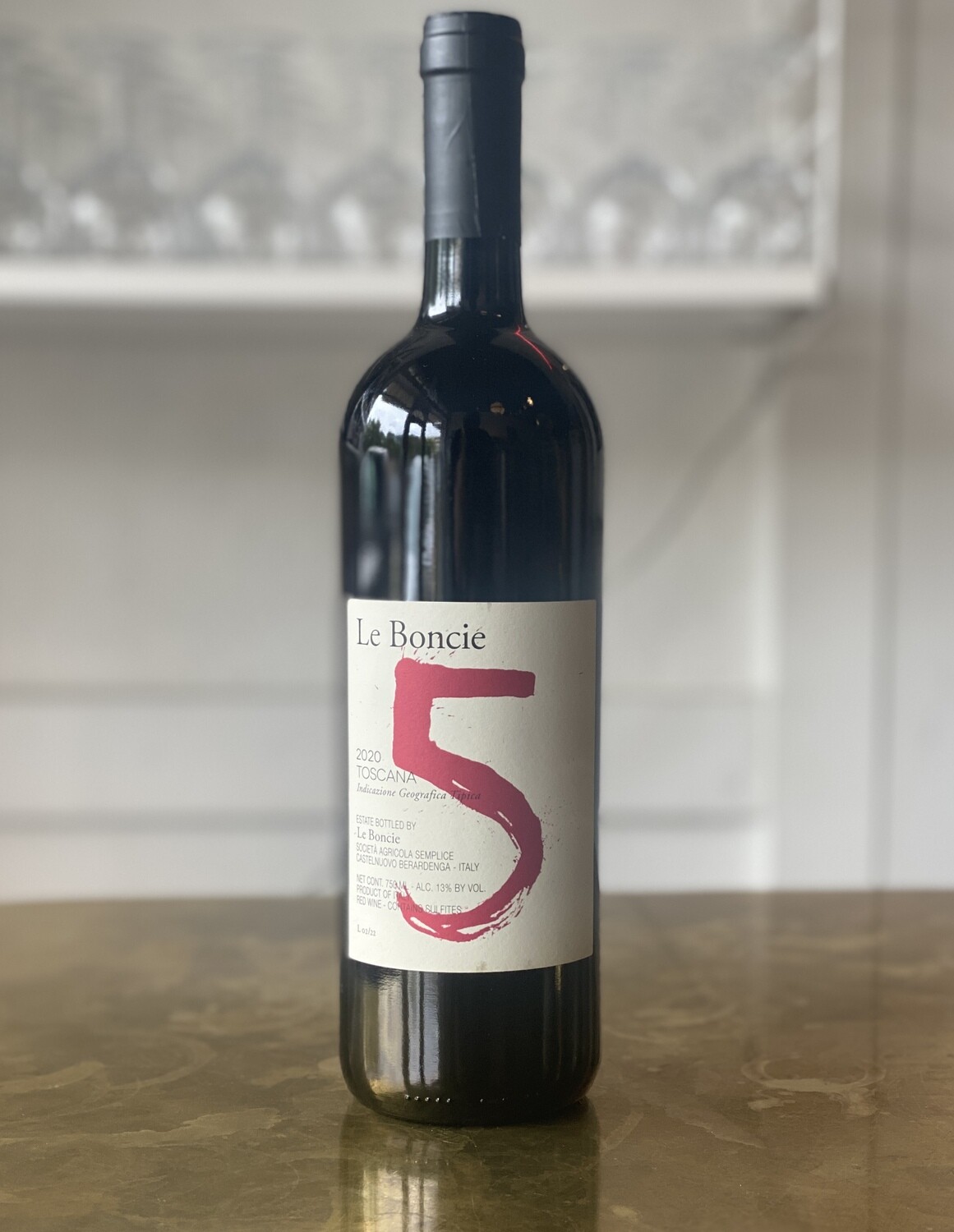 “Il Cinque”: is the little brother/sister of “Le Trame” from Podere Le Boncie. Originally this wine was sold only at the winery and was essentially created from fruit of vines younger and/or less well-positioned. The wine’s name “Cinque” recognizes the original composition of the wine, namely five grape types classic to the production of the finest Chianti Classico: principally Sangiovese with Colorino, Mammolo, Fogliatonda and Ciliegiolo completing the quintet. Recently, the wine is no longer composed strictly of the 5 grapes anymore, but Giovanna says the name also refers to the relative precociousness of the wine, thus a wine to “keep at hand” [5 fingers]. She also notes that grape vines have five leaves and flowers per bunch, that their house address is number 5, and that in Italian school you are graded one to ten, with five not quite passing, a bit of ironic understatement and a wink-of-the-eye modesty in reference to a wine that has assumed a rather majestic place amongst the elite wines of Tuscany. Cinque is perhaps less formidably structured than the Le Trame but it is no less noble, carrying its mantle of the particular terroir borne of the hills surrounding Castelnuovo Berardenga, wines of vigor and cut that chant the song of Sangiovese. All parts of a good story to justify this quirky name of “5” or “Cinque”.

When Giovanna’s father gave her a small farm with olive groves, called Le Boncie, she added a vineyard planted with her favorites from the experimental project – Sangiovese, obviously, but also Ciliegiolo, Colorino, Foglia tonda Mammolo and Prugnolo., The vineyard, planted to a very high density of 7000 vines per hectare and dedicated principally to Sangiovese (supplemented by a few rows of Fogliatonda and the others for blending), produces the definitive wine of the estate: “Le Trame”. Vineyard work is conducted according to the general principles of the biodynamic movement. Harvesting is by hand. Fermentation occurs in traditional open-topped wooden tanks. The elevage is long and tranquil with an occasional racking implemented to aerate the wine. Aging occurs in mid-size barrels; the wine is then left to age in bottle for at least six months prior to release.