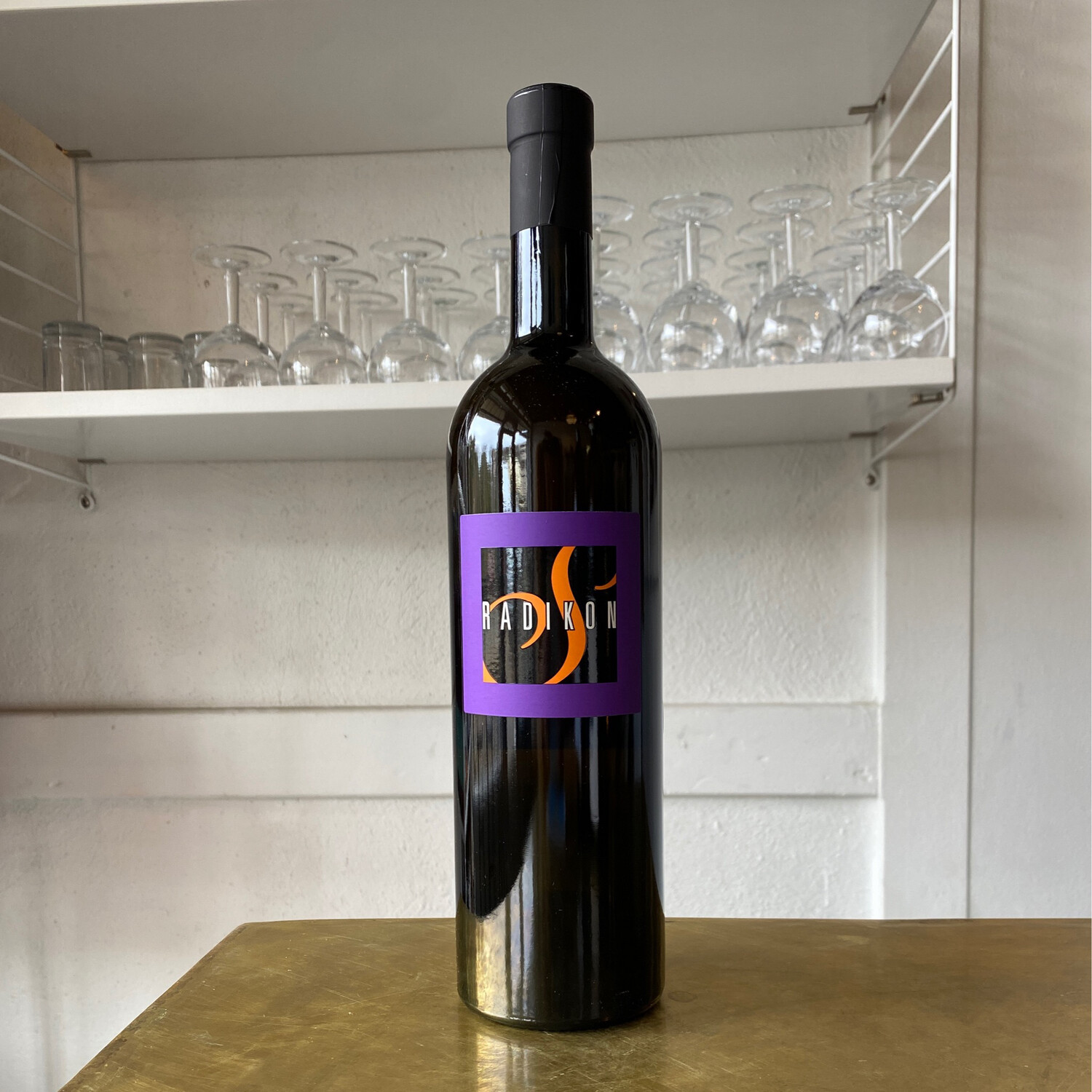 Slatnik is named after a nearby village. It is part of the "S" line from Radikon, which sees shorter macerations, is lightly sulfured at bottling and released in standard 750ml bottles.

Stanko Radikon is a maverick in a land of mavericks. The town of Oslavia, on a relatively tiny stretch of hills north of the border town of Gorizia in the Isonzo zone of Friuli, is home to a number of talented and individualistic wine makers. From Radikon’s home, you can carry a plate of freshly cooked polenta to Edi Kante and Jasko Gravner, two other world-renowned winemakers, and still eat it piping hot.

The steep rolling hills surrounding the Radikon’s home/winery are testament to Fruili’s viticultural legacy. The vineyards were originally planted by Stanko’s grandfather Franz Mikulus with the local favorite, the Ribolla Gialla grape. In 1948, Stanko’s parents, who had inherited the property from his mother’s father, planted Merlot, (Tocai) Friulano and Pinot Grigio. Today, Stanko, his wife, Suzana and son, Sasa maintain their family’s land.

Radikon explains on their website:
“The winery’s philosophy is to always make a natural, organic wine with the least human intervention possible and with the maximum respect for the soils and nature.

In the vineyard, the vines are planted extremely tight (between 6. 500 to 10,000 plants per hectare). We do not use any chemicals or synthetics and the treatments using absolutely innocuous, non-harmful products are minimized. Through careful pruning and selection at the time of harvest, the hand harvested yields are kept well below 2.25 tons per acre.

In the cellar, the grapes are de-stemmed and then macerated on the skins for 30 days more, with experimentation of 6/7 months for the whites, and 35 days for the reds. The pressing is done softly using a pneumatic press. All phases of the vinifications are in Slavonian oak barrels, first in wood vats and then in large barrels in which the wines are aged for about 3 years before bottling. The vinifications are done using only the natural yeasts present on the grapes. There is no sulfur added at vinification or bottling.”

Radikon, while extreme, has never thought much of the use of anfora, or buried terra cotta jars, for vinification. His idea of wine is an ideal taste of recent memory, not a renaissance of ancient winemaking arts. But not one to avoid controversy, Radikon, along with Kante, have initiated a new discourse on the ideal vessel for wine with the 2002 vintage releases.

First, Stanko believes that the 750 ml size does not really provide the right amount of wine for 2 people to share at dinner – an argument not easily rebutted. Therefore, he wanted to bottle all of his wines in liters and half-liters (because 2 people could then have a half liter of white and a half liter of red).

Following from this, in studies that he and Kante conducted with a cork manufacturer, they have devised what they think is the proper size of cork for these two bottle measures that gives the optimal surface-to-air permeability ratio for aging their wines. It is a narrower, smaller cork than the classic model. In deference to this cork, Stanko himself created a prototype bottle from silicon for the new liters and half-liters, and then had them manufactured at a local bottle factory. They are graceful, elegantly-necked bottles that were designed to fit in to most spaces where a 750ml bottle would.