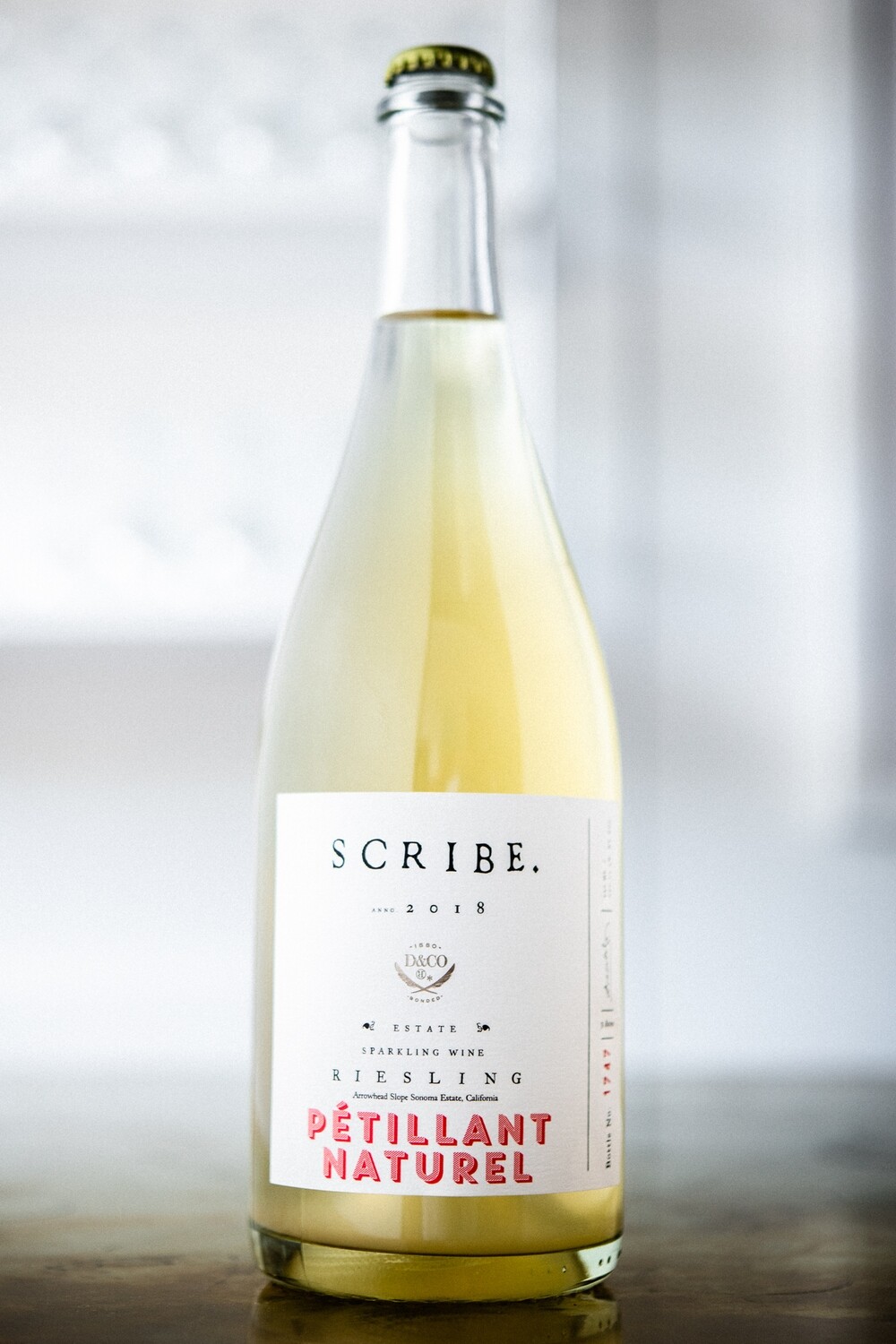 Crafted using the ancestral method, this wine is bottled before primary fermentation is finished — without the addition of secondary yeasts or sugars. The wine completes the fermentation process in the bottle, capturing Co2 and resulting in a lively, rustic, terroir-driven sparkling SCRIBE wine.

The Scribe Winery tale begins with a charming young entrepreneur named Andrew Mariani and a storied piece of land—home, most recently, to a turkey farm—located about three miles east of the Sonoma town square. A mile-long driveway lined with palm trees leads to a decrepit hacienda built a century ago by two bootlegger brothers from Germany. Acres and acres of brush and cactus surround impeccably trellised grapevines. In the distance are vast expanses of conserved mountainside, where foxes and mountain lions roam beneath California bay laurel, oak and madrone trees.Scribe founder Andrew Mariani and his brother Adam grew up in a farming family in the Santa Clara Valley. Andrew and Adam see themselves as scribes of their land, and the Scribe winery is the result of their labor. One of their primary goals is to help revive their property, while making sure not to overpower nature's patterns in the process. This goal is embodied in what they call “Forever Wild Farming,” which works to integrate their harvest into the existing ecosystem of the land. Together with winemakers Kristof Anderson (Nils Venge’s protegé) and Andrew Avellar, the Mariani brothers have chosen to ban the use of chemicals on the property, and instead solely participate in natural methods of vinification. The team works to increase the biodiversity of their land by encouraging natural species to thrive alongside the vines. Andrew reiterates that the outcome of these choices includes wines that are faithful representations of their origins and a sustainable model that enriches rather than depletes the land.

In 1858, the son of a famous German champagne producer named Emil Dresel purchased the land and started a vineyard with cuttings he had smuggled into the country on his maiden voyage in 1849. Amongst these plants were the first Riesling and Sylvaner varieties imported to the United States. His brother Julius joined him in 1869 and the outspoken duo were known to be fervent abolitionists, aggressive gamblers, occasional outlaws, and viticultural pioneers. Flamboyant behavior aside, the vineyard was a great success and in 1904, under the eye of Julius' son Carl, Dresel wines received first place in the red and white wine categories at the World’s Fair.

After years of success, the winery crumbled in 1920 with the enactment of
Prohibition. The family burned the Dresel Wine Co. bond in protest but the hacienda continued to serve up tasty beverages and rowdy good times. With the help of the San Francisco police force, the property served as a byline for bootleggers to transport their goods, as well as a password-protected speakeasy. On a dark night one need only whisper, “Julius sent me” at the building’s back entrance. Inside, you’d find a maze of whiskey, music, wine, and for the right price, a young lady to show you up stairs, where the hacienda ran an altogether different business.