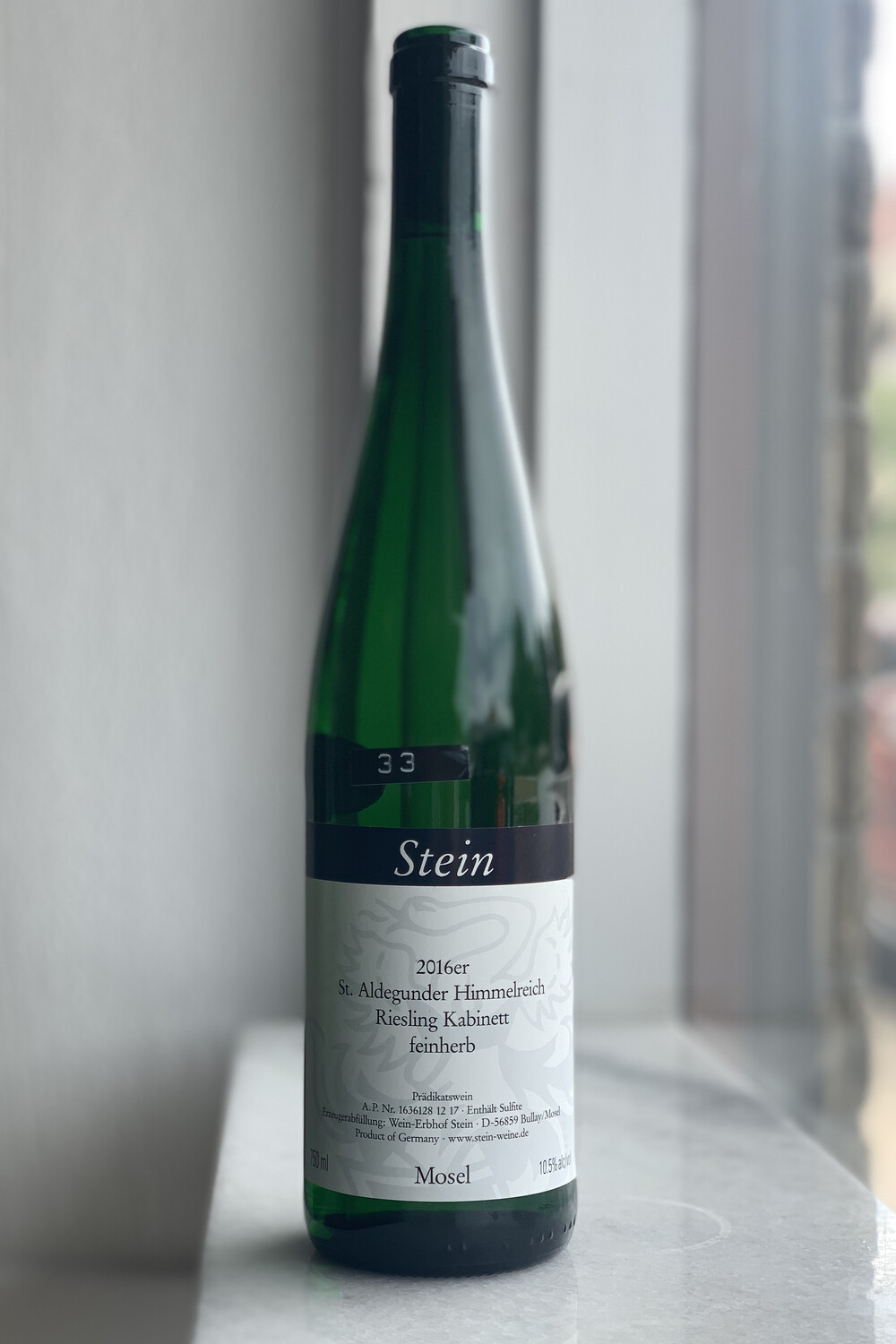 2016 started out rough in the Mosel, with spring frosts, pest pressure, and bud break as late as June in some vineyards. Summer was sweltering, but fortunately for Stein, they enjoyed favorable, cool conditions going into and during harvest. The resulting wine is classically structured like the 02 or 08 vintages, but drinking very nicely now due to the summer sunshine. Given that the vintage finished cool, acid in the grapes maintained, and this wine is zippy, light, and gone too quick. It sits at a refreshing 10% ABV with barely detectable 11-14 grams of residual sugar that serves to round out the fruit before that unmistakeable sit-up-straight-in-your-chair jolt of acidity catapults you into an expanse of cool, salty slate mineral water on the finish.

Most of the vines here are single stake 80-90 year old ungrafted beauties rooted in crumbling blue slate. Most sites like this one are going fallow, and with them, these historical styles like Kabinett-Feinherb are nearly extinct. This is a cool site even by Mosel standards, and is perfect for delicate, dry and slightly off dry Rieslings of immediate refreshment and endless fascination.

All grapes are harvested by hand, generally in multiple passes. The entry-level wines are often comprised of the first selection through the vineyards. The percentage of grapes destemmed depends on the vintage and specific wine. A pneumatic press is used and all juice is gravity fed to settle before fermentation. The basic wines brought into the U.S. (Blauschiefer Trocken and Weihwasser) are mostly fermented in traditional 1000L Mosel Fuders (most of which are 50 to 100 years old), though stainless steel may also be used depending on vintage and quantities. All wines start fermentation spontaneously; entry-level wines may be inoculated after 30% of the sugars have been fermented. A small amount of S02 is added around three weeks after fermentation ends. Total S02 is 25-75ppm for the basic wines depending on the vintage. None of the wines are fined; the basic wines are filtered using diatomaceous earth after 3-12 months on the lees. The higher-end wines may see lower sulfur and/or not be filtered at all. The “Ohne” (meaning “without” in German) wines have no S02 added are not filtered and spend longer time on the lees.