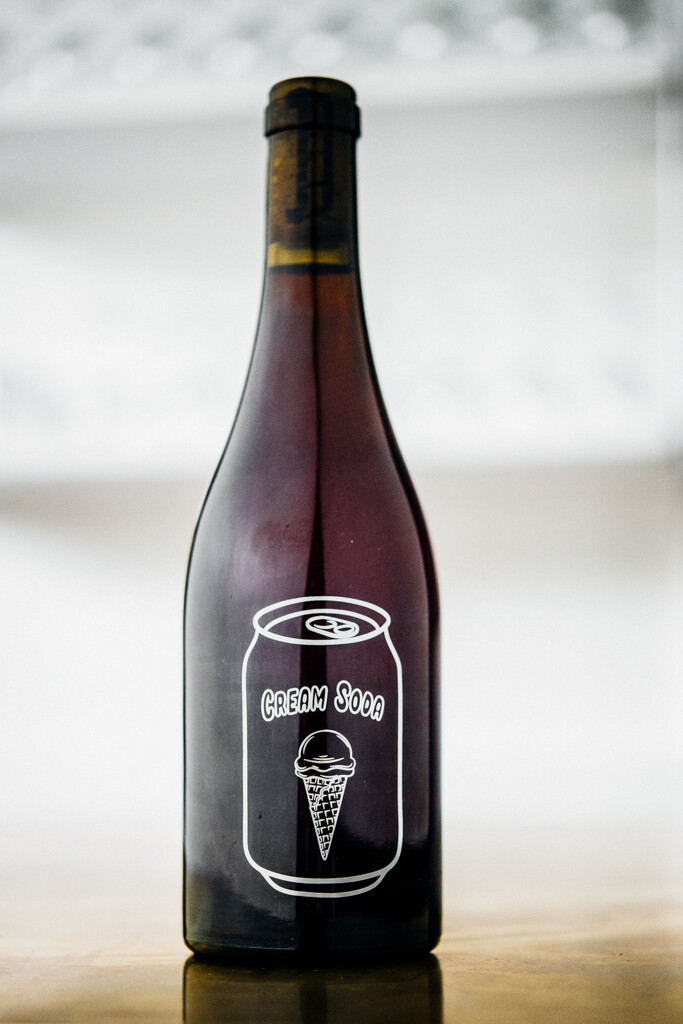 Sam feels that no questions asked, Cream Soda was THE R&D breakthrough of 2019. The conceptualization for this wine started out as a first draft for the 'Spring' wine, with the concept being focused around creating a wine that tasted like 'cream soda.' It started out certainly as something nostalgic from Sam's youth but transpired into a unique, multi-sensory experience...if the execution was spot on. It was... It stated trying to break down the aromatic constituents of cream soda itself. To do this Sam roto-evaporated a sample of cream soda to discover it's molecular aromatic profile. He found high levels of limonene, which is the most abundant aromatic molecule in oranges, mandarins and lemons. He also isolated small percentages of ß-pinene which is another active aroma in lemons. As expected there was also a very high concentratin of vanillin compounds, contributing to the 'creaminess' of cream soda. Therefore the focus of the experiment was on lemon, orange and vanilla. This is a blend of Greco and Gewürztraminer, with the former coming from Ashley Ratcliff's 'Ricca Terra Estate' in Riverland and the latter from the K1 Vineyard in Kuitpo. The final cuvée is a blend of 60% Greco (providing the orange and lemon aromatics as well as acidity) and 40% Gewürztraminer (balanced the acidity of the Greco with more pronounced fruit sweetness and floral aromatics which complement what is about to come). In order to emulate the cream soda's vanilla-ness, 2.25 pounds of vanilla pods were rotary-evaporated with distilled water in order to produce a vanillin-scented distillate. He then found through research and trial & error the right blend of 1mL of vanillin distillate to 200mL of wine was ideal, meaning every bottle of 'Cream Soda' is .5% vanilla distillate. The color was the next step and is the result of infusing seven pounds of dehydrated and ground red currants into the wine. This also brings a bit of 'red berry' flavor that contributes to the overall balance and flavor profile of the wine. In many ways the color of the 'Cream Soda' changes the way one perceives the flavor. When red-colored food and beverages are consumed, the western human brain perceives them to be sweeter than they actually are. Thus flavor is manipulated by color and In this instance the red currants turn what is primarily an acid-driven wine into something perceived as sweeter. There is zero residual sugar in this wine but because of the feint red color and the addition of vanilla, it is perceived as having some sweetness. This is an unbelievably exciting wine for Sam as it is the first time he has reverse engineered food or wine on a molecular level and used natural winemaking techniques and organic added produce to emulate the original product.

From his inception into the wine industry in 2014, Samuel’s focus has been firmly affixed to procuring exceptional fruit from sustainable vineyards before utilising lo-fi vinification processes as a precursor to hi-fi finishing techniques. His utilisation of Australian Native flora, as infusions, has placed VHS Wines at the forefront of the avant garde.

The narrative behind VHS Wines is as compelling and thought provoking as the wines themselves. Samuel’s journey into the world of winemaking was initiated during a period of crippling drug addiction and from a time of self-destruction, self-creation prevailed.

Samuel’s philosophy and ideology on winemaking centers solely on consumer perception and experience. At its core, VHS Wines seeks to create a multisensory experience built around “concept” releases. 2016 saw the of the release of “Rat Shit in Love Symphony”, a symphony four wines of wine with musical pairings and designed to be enjoyed in succession. The release of the “Ballad of the Broken Boy, & Beyond” in 2017 saw Samuel push boundaries once again as he attempted to tell his life story as “Chapters”, through the medium of wine, from life through to (hypothetical) death. Samuel’s autonomous approach to his craft has made him a modern day virtuoso of the industry and allowed his skillset to exponentially expand, all in the space of only 4 years.

In Samuel’s own words “The wines are certainly not perfect, in fact, far from it but I believe there is an honesty and integrity within them. Within any creative process it’s always imperative to define the parameters, and limitations, of your skillset, environment and materials and seek to utilise those as a foundation. Mistakes will be made and knowledge gained, that’s an exciting prospect”.

Samuel already is, and will continue to be, a one to watch in the future as VHS Wines continues to sell out en primeur year after year.