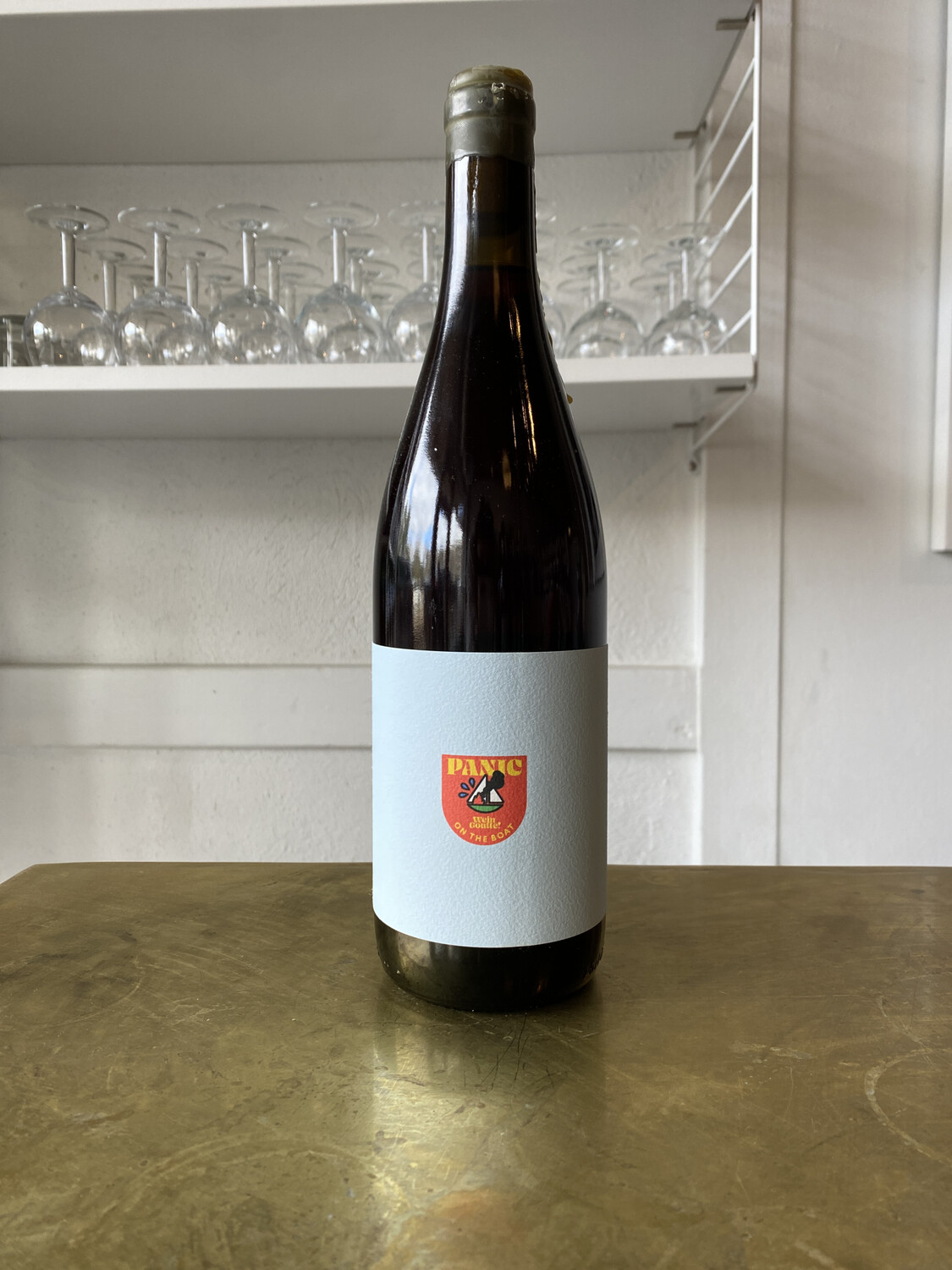 Panic on the Boat was named after a phrase used profusely in a kitchen where Emily worked back in the days, to signify that one station was sinking slowly in the waters of a busy service. If you heard one of the cooks say “Panic on the boat!” you knew someone was in need of help. It remained a fond and funny memory.

However, we did not make this wine in a panic. Quite the opposite in fact, since we foot stomped the first red grapes of the season on Friday afternoon, went out to get married over the week-end, and came back to press them on Monday morning. A light, gentle extraction that made the base of this dark rosé, which was later assembled with direct-pressed rosé that was chilling nearby, which lit the blend on fire with fruit and acidity. Two wines that were supposed to leave the nest independently, but ended up being a better team than solo players.

Vinification: foot stamped thin-skinned red grape (you can probably guess this one) pressed after 4 days, and assembled with a direct-pressed Austrian original red grape (take a wild guess) short before bottling.

Our wines are made to be enjoyed with friends, or enemies, anyone you may call family, or alone on any day of the week. We encourage you to try them over a large variety of moods. Our story is very uncomplicated. We are two wine enthusiasts, or call us professionals if you have to, who met over the hot harvest of 2018 in Austria. Our marriage followed in 2019. Both of us were cooking professionally as a first career, which we eventually ditched to go into wine full time.

Emily is the Wine Director of Restaurant Candide in Montreal, since 2016 up to this day, working remotely from her home in Europe (yes that’s feasible). She is also a week-end wine writer, her work is occasionally published in various magazines and web platforms in English and French. Christoph has studied Oenology and Viticulture in Neustadt (Germany), where he learned a lot of important stuff. He worked for Clemens Busch for a few years, before moving to Austria as a full-time member of the Weninger team, where he officiates as a cellar master. We also build daily dreams of starting a small vegetable farm in the near future, which will be aptly named Goutte Gemüse. If your rich uncle wants to invest, send us an email.

All the grapes for the wines below were grown by Weingut Weninger, which has had a biodynamic approach of viticulture for over a decade now. They have (amazing) vineyards on both sides of the Austro-Hungarian border. They generously provided a space for us to nurture a few barrels, and precious guidance in sending them out to the world for the first time. While we care deeply about the sense of place a wine can demonstrate, we decided to declassify our wines as Europäischer Wein anyway. It was our first year making wine together, we still have a lot to learn and explore, so we approached the vintage (XIX) with an experimental mindset. The day will come when our interpretation of a vineyard will feel connective enough for us to write it on the bottle. Until then, we’ll keep it as simple as possible. This also means we cannot disclose variety or vineyard details on this website.

We hope you like drinking them as much as we liked making them.